Home » Home & Garden » Remodeling, Maintenance & Home Decor » How To Get Rid of Bats From Your Home or Building
220 Shares
Pin211
Share9
Tweet
Some articles on this site contain affiliate links. If you purchase through these links, we may earn a small commission at no additional cost to yourself.

Do you need to know how to get rid of bats from your home? I’ve got a great, low-cost solution for you that is safe (for you and the bats) and is the preferred method of removal by “bat-friendly” organizations. In fact, it is probable that you live in an area that has laws in place that protect bats. Here in Georgia, a permit is required from the Georgia Department of Natural Resources when bat removal from a structure is necessary from May 1st through August 15th, the bats’ maternity season. Luckily, I discovered them in April and dealt with them in a timely manner.

Check your local and state regulations, if bat removal is necessary.

I had a small colony of Little Brown Bats (Myotis Lucifugus) roosting in the gable vent in my home recently. The screen on the inside of the vent prevented them from living in my attic, but they seemed to like the shelter and steady supply of warm air passing through the gable vent, so they would latch onto the screen while keeping warm and dry. It’s very typical of bats to roost in gable vents for the reasons I mentioned.

How To Know If You Have Bats

Short of seeing them on your own, there are a few signs. I noticed the bat droppings (guano) in the driveway directly below the gable and knew something had to be done.

There were over a dozen bats and I had to figure out how to safely get rid of them in a humane way. Bats should never be handled or harmed.

No poison was used because:

None of the bats were hurt, maimed or killed and all of them found new homes elsewhere. That’s a win-win situation for homeowners and bats alike. 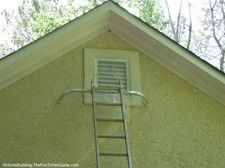 How did I get rid of the bats without harming them? It was a very simple solution that did not require me to buy anything in addition to what I had already purchased for various projects around the house. I created an exclusion device that allowed them to safely exit the gable vent but did not allow them to re-enter. An exclusion device is a one-way valve placed over the exit point. You can make it out of plastic sheeting, like I did, or you can use fiberglass screen or bird netting. I came across the solution to my bat removal dilemma after talking to my neighbor.

They had a colony of bats living in their attic several years earlier and sought out an alternative solution to a pest service because the pest control service was asking for $1,500. That’s when they contacted a few different places including the county extension office, the Chattahoochee Nature Center and our local Farm Bureau. Here is what was suggested to them by trained professionals:

How To Get Rid Of Bats The final step was to make sure that the gable was covered on the outside. I measured the gable vent and cut a piece of fiberglass screen to fit. I secured it with a staple gun on the inner frame of the vent and trimmed any excess screen. Give Bats A New Home If You Can

I decided to take it a step further and provide them with an alternative home after the soon-to-come eviction. I bought a bat house and temporarily hung it in front of the plastic sheeting on the same day. I later learned that I should have hung the bat house next to the gable vent prior to evicting them.

The plan was, when they returned during the evening or in the morning and couldn’t get back in the attic, they would simply take up residence in the bat house because it was in the same location as the vent.

Unfortunately, they did not roost in the new bat house but I’m hopeful that they will find it again in its’ new location on the chimney. The bat house should be positioned to receive the first 7 hours of morning sun. The photo on the left shows the accumulation of guano and the photo on the right is after I cleaned it up. It’s a very messy, smelly job. You’ve been warned!

Tips and Warnings About Bat Removal